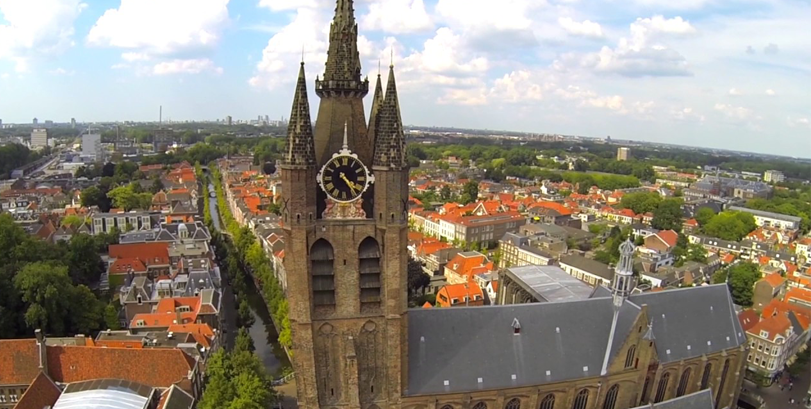 The first parish church of Delft, the old church, was built around 1200. In front of the church a 75 meters high tower, with a brickwork spire and four turrets, was built in 1350. Even during its construction, the tower was plagued by subsidence. This could be because the water in the Oude Delft had to be redirected to make way for the existing church. The tower, therefore, was probably built on a filled-in canal. Throughout the ages, the leaning tower has been the cause of considerable alarm to many an inhabitant. The tower leans 1.20 meters to the west and 1 meter to the north.

Two unique bells hang from a heavy oak bell cage in the fourth loft in the tower of the Oude Kerk (Old Church). These are the Trinitas bell dating from 1570 and the Laudate bell dating from 1719. The Trinitas bell, or Bourdon bell, is the most exceptional of the two, weighing almost nine tonnes (!). The Bourdon can still be heard each day, although somewhat modestly when a hammer chimes the hour and half-hour. The Bourdon is only rung on very special occasions such as,  for example, the funeral of a member of the Dutch royal family. The powerful chime of the Bourdon causes such heavy vibrations that regular use could damage the monument.

In this problem for the study group, we try to model the effect of ringing the extremely heavy bells inside the leaning tower with mathematical methods. Is it possible to analyze the effect of ringing on the stability of the tower and on the occurrence of damages in the tower?  Is there resonance?
Modeling a skew beam with a heavy pendulum can be mathematically interesting, because of the possibility of chaotic behavior. But is this model too simple? Should one include damping? How does one model ancient stone constructions?

To be able to work on this problem, it is necessary to collect detailed information about the old church (height, width, the weight of bells, the position of bells, other relevant issues). It is known, for example, from scaled drawings of the construction, that the backside of the tower is heavier than the leaning foreside (more stones are used in the backside part). Also, the heaviest bell is placed on the backside.

The body of the tower has four floors and a thirty meters high spire, in which again four floors. The lowest tower room can be reached via a short porch, built after 1500, the now-closed passages left and right to the aisles are still recognizable. It is obvious that these were made when the tower was already leaning over.
In the northern aisle is a spiral staircase. The first floor accommodates the large wrought-iron clockwork (1605); it is out of order now. The much smaller clockwork that took over in 1885 is also out of order and is now placed inside the old one. The present clockwork is placed at its appropriate place near the clockfaces. In the northwestern corner of the tower, at second-floor level, is a charter chamber with an old iron door. It is said that here Balthasar Gerards, the assassin of Prince William of Orange, was locked away.  The third floor only heightens the tower. After all, it was important to be able to place the bells as high as possible. The fourth floor is the ´klokkenzolder´ (bell attic). Here stands a robust oak frame from the 16th or 17th century, in which the bells rest.

Oude Kerk Delft – The Bourdon Bell and the Skewed Tower