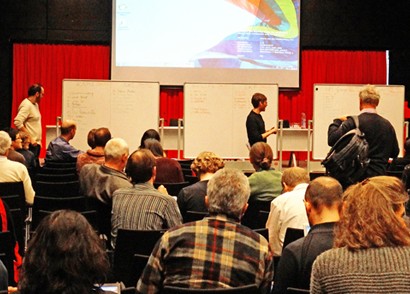 The Study Group Mathematics with Industry (SWI) is a combined industrial–academic workshop where mathematics is used to tackle problems presented by companies and other organisations outside academia. Roughly between fifty and eighty mathematicians, both from industry and academia, gather during the week to collaborate intensively on industrial problems.

Six problems, one week
The format follows the original Oxford model, dating back to 1968, which is used worldwide in similar study groups. Six companies each present their problem on the Monday. The participants devote the entire week to solving these problems in smaller groups. During the week groups maintain contact  with the problem owner to ensure that their efforts stay targeted at the problems posed by the companies. All groups present their work on the Friday morning.

SWI 2023
The 2023 Study Group will be at the Groningen Univeristy, from January 30 to February 3. More information can be found on the SWI 2023-pages of this website.

Social media
You can follow the Study Group Mathematics with Industry on Linkedin.