Road networks are becoming more and more vulnerable to incidents as a result of an increasing level of congestion. Predicting ‘reliably’ the expected time of arrival (ETA) is therefore becoming a serious challenge as incidents/accidents occurrence is quite a random process and their impact depends on a variety of factors making it far from trivial to model adequately.

Reliably being able to predict the ETA has a beneficial economical effect on how small and big logistic companies can improve their schedule efficiency. For shippers, carriers, and terminal operations it is important to have reliable and predictable travel and handling times.

It is estimated that the cost of congestion for freight transport was between   650 and 850 million euros in 2014 and is expected to increase in the coming years.

TNO does have algorithms that predict the ETA quite well based on pattern recognition and a traffic history dBase. These algorithms however perform poorly when an unpredictable situation like an accident or an unexpected weather condition occurs as we do not understand how the traffic situation will evolve from there.  Figure 1 below shows the impact of an unexpected snowstorm on November 29, 2010. The whole motorway network was gridlocked. Figure 2 shows the impact of a big incident involving a truck losing its cargo and damaging the road. It lasted from 15.00 hrs to 21.00 hrs.

The impact of accidents doesn’t necessarily stay local, because drivers may choose an alternative route or they might even adjust their departure time, choose another mode, etc. Figure 3 shows the potential effects of an accident. TNO has a data-driven method available to computes the delays caused by an incident that focuses on effects 1, 2, and 5 (Snelder et al., 2013). A method that analyses the impact of the other effects is not available yet. Similarly, we have an offline (Corthout et al., 2009) and real-time (Calvert et al., 2015) short term marginal prediction model that predicts how the flow and speed upstream of an incident location will evolve in the near future (i.e. 30 up to 60 minutes ahead) that focus on effect 1 and 2. 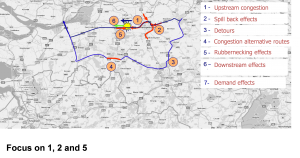 Problems directions are as follows:

Given an accident at a certain time and location on the motorway network.

Include alternative route choice on motorways and preferably also on arterial routes.

TNO will provide the necessary traffic data in terms of flows and speeds for each minute at every 200 meters on the motorway network on the day of the modeled accident(s). A use case of a typical accident during the morning peak, evening peak, and off-peak can also be provided.

This problem is related to the gravity program of NETWORKS.