Nowadays waterborne coatings (WBC’s) are increasingly replacing traditional organic solvent-borne coatings (SBC’s) in many applications due to stricter legislation originating from an ever-growing environmental awareness in society. One of the few disadvantages of WBC’s is that they generally require longer drying times as compared to SBC’s. For that reason, the drying process of WBC’s has received considerable attention from researchers in both industry and academia. From an industrial and application point of view, it is not so much the drying process, per se, that is of interest. What is more interesting is to understand and control the simultaneous drying and stiffening of the coating or film also known as the film formation process. If a coating needs to be handled or post-processed it should have adequate mechanical integrity, such as a sufficient shear stiffness (resistance to shearing), to prevent it to become damaged. 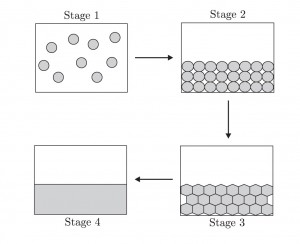 This film formation process is commonly believed to consist of four stages (see figure above). Starting from a stabilized dispersion of deformable polymer particles in water, a latex (stage 1), mass-transfer limited evaporation will lead to some state of close packing (stage 2). Polymer particles are then subsequently deformed by van der Waals and capillary forces into a new state in which particles are still distinguishable but voids have disappeared (stage 3). In the final stage (stage 4) polymer molecules diffuse across particle boundaries causing the particles to merge and become indistinguishable and hence the film to become continuous and obtain its mechanical integrity. All four stages have been addressed in the past literature, in particular the second stage, but the development of the mechanical integrity of the film (transition from liquid to solid) has hardly been touched upon.

The goal of this project is to develop a mathematical model for the final two stages in this film formation process. As the process is rather complex, a “toy” model mimicking the true state of affairs would be acceptable. For instance, a lattice model description could be an option to consider.