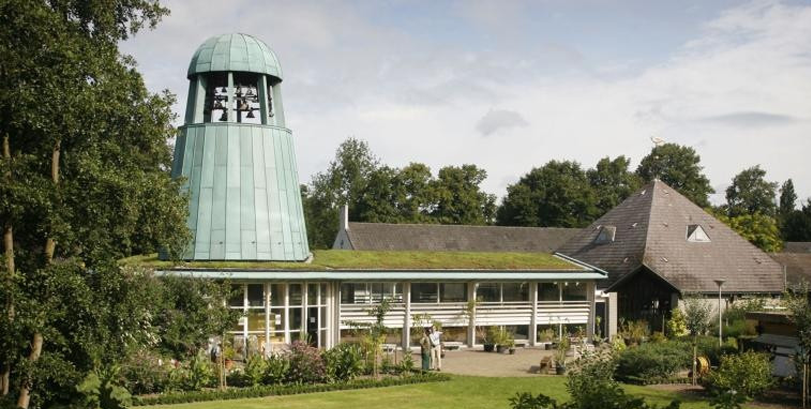 A carillon consists of approximately 20 up to 45 bells. These bells hang in an open lantern-tower (like the Munttoren in Amsterdam) or inside a tower under the roof. A carillon is played using a keyboard that is generally located one story below the bells. A wire connects each clapper to the keyboard. The oldest and most well-known way to construct such a wire-connection is by using the so-called broek-system.
This broek-system has a simple structure, as can be seen in the following sketch.

The ring in the middle is called the broek-ring and to this ring, three steel-wires are attached. The wire going downwards connects the broek-ring to a key on the keyboard and is called the key-wire. The wire pointing upwards is called the broek-wire and is attached to a fixed point and the wire connecting the clapper with the broek-ring is called the clapper-wire. By playing a key on the keyboard, the key-wire pulls the broek-ring down, and the clapper strikes the bell. Using this kind of wire-construction each and every bell of the carillon needs to be connected to the keyboard. From the photo above (of the carillon in the museum) it is hopefully clear that this is not an easy task. Especially not because there are quite a few requirements that an ideal broek has to meet. For one, the wires should not be too close to each other because pulling on them will make them swing a little. Also, the proportions of the lengths of the wires and of the angles between the wires are of crucial importance for the carillon to play well and regular. For each bell, there is an optimal ratio of the angles between the wires. 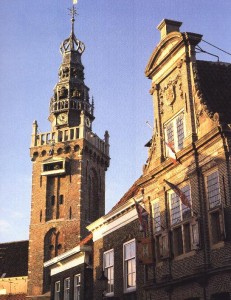 The carillon of the church in Monnickendam

Until now, a carillon-builder places the bells and the wires of the carillon in a tower by using only his experience. Furthermore, he will try to put the broek-system up in a geometrically balanced way. However, because of the constraints that must be satisfied this will not be possible for all the bells (or at least it will be extremely hard to do) and will lead to problems when connecting the last bells with the keyboard.

Het Nationaal Beiaard Museum – Hanging a Carillon in a Broek-system